Context: This is the opening comment I made to a conversation at the GitHub repository for Schema.org where folks are considering a proposal or recommendation to "Add Exhibition as a subtype of Event".

My intent in contributing to this on-going conversation was to be a kind of #FlyOnWall reminder that the #cidocCRM -- the ISO standard Conceptual Reference Model for Museums and other cultural heritage organizations -- can be used as a process-oriented metamodel and not just as a descriptive ontology. This following opening statement can be found here. BTW, this comment can be read as a kind of "There's a pony in there somewhere..." piece to further reinforce the thesis of my "Witmore's Text..." Medium.com article.

Re @BarryNorton and @MiaLondon et al -- Whatever you do, Dan, PLEASE do it so as to be a #cidocCRM-compatible form.

Ontologists tend toward descriptive use of the #cidocCRM as a metaDATA standard when it is intended to also be a metaMODEL supporting its use to prescribe elementary building blocks (model elements, like parts in a LEGO blocks set) of software architectures. Until there is wider recognition of the SIGNIFICANT leverage that metamodel-driven software design can do for the Digital Humanities, the #cidocCRM will be as woefully under-utilized as it is currently under-appreciated. (Yes, as much great work is being done with the #cidocCRM, there is SO MUCH as-yet untapped potential in leveraging its metamodel nature.) 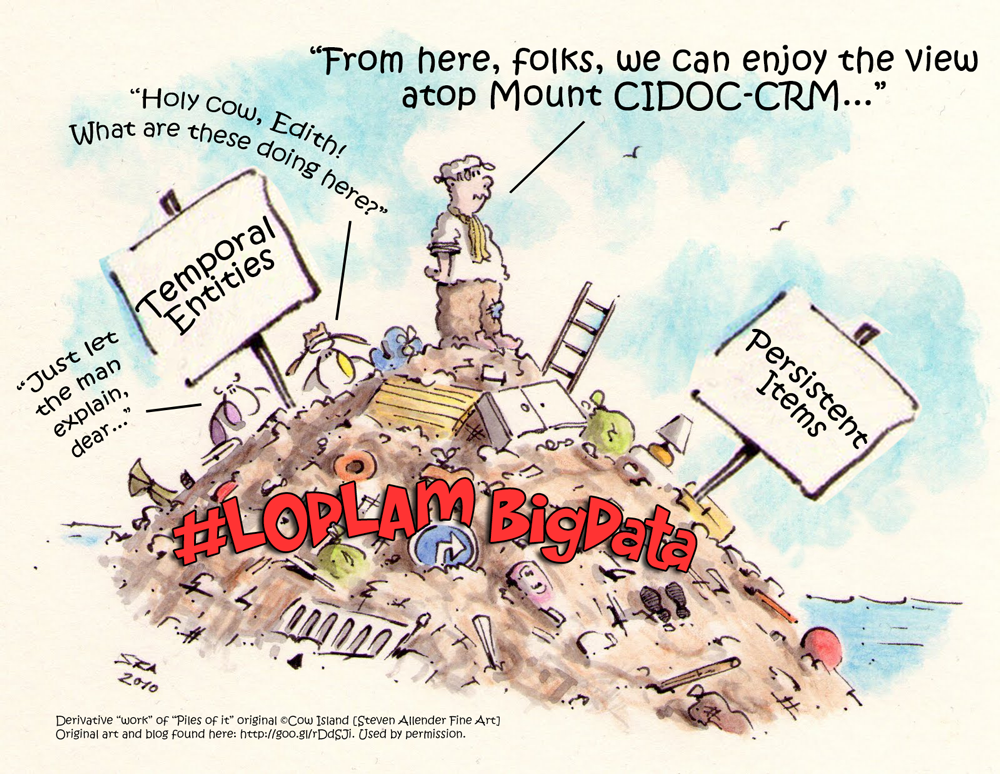 Why do I believe this? I was a lead in a Smalltalk-based skunkworks in IBM's Object Technology Practice doing "executable business model" frameworks in the 1990s behind closed doors of corporate consulting. Our work was inspired by David Gelernter's "Mirror Worlds" book, and was based on "self-descriptive" Smalltalk images that were compliant to an actor/role metamodel that objectified Process (an OOP heresy at the time).

Following my horrific cancer battle and a chance to stick my finger in the eye of the Reaper and come back for some Bonus Rounds, I find myself as a Wolf Child in the Wonderland of Digital Humanities' "Golden Moment."

When we were trying to do EBMs (executable business models) at IBM, we trolled the various IBM Global Services consulting practices for viable IRMs -- each practice was required to create an Industry Reference Model, AKA a metamodel. These IRMs ran the gamut from worthless tripe to "Wow!? Pretty good!"

I most enjoyed "pair programming" with my first ontologist, we called him "Doug the Librarian" because he "just modeled" and didn't code. Basically, what we were looking for in partners to do metamodel-driven software development were three things:

THE DIGITAL HUMANITIES DOMAIN HAS EVERYTHING NEEDED TO DO METAMODEL-DRIVEN SOFTWARE DESIGN AND DEVELOPMENT IN THE EXTREME! :D

And the #cidocCRM is the BEST opportunity I've seen to date to move in this direction.

Along these lines, I am working on #cidocCRM microservice workflows based on a 'self-descriptive' metamodel subgraph design pattern for LAM-based social games (front-end clients) and #cidocCRM-compliant collections management and scholarly editing back-end.

(BTW, a first step in this regard is to more rigorously express the #cidocCRM in pure-graph form to support vendor- and tech-neutral self-descriptive datastores.)

If anybody is interested in these ideas, please see: http://goo.gl/dpbhPs and http://goo.gl/gS2FJk, etc. at @FactMiners (www.FactMiners.org). This recent Medium.com article is the closest thing to a 'manifesto' on my applied research agenda: http://goo.gl/3Vb0lO.

In closing, I am an unaffiliated independent Citizen Scientist/Historian working from an Outsider POV. Inquiries to clarify ideas as well as explorations of opportunities to collaborate are most welcome @Jim_Salmons, @FactMiners, and @SoftalkApple