Computer Vision, or using its popular acronym 'CV', is a domain of scientific knowledge and practice within the domain of Artificial Intelligence which is part of the broad domain of Computer Science. CV is a particularly challenging field that has strong connections into each of the Science, Technology, Engineering, and Math 'branches' of the STEM fields of education.

You only have to glance at the image here of a modern auto assembly line and compare it to one of our not-so-distant mid-20th century lines, or watch the workerbot demo video to know this: What is currently an exciting bleeding edge of CV and AI research and industrial practice today will be mainstream vital skill areas for both entrepreneurial and employment opportunities in the near and foreseeable future. 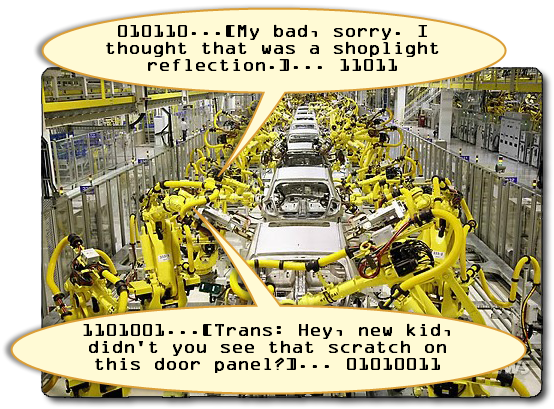 And how will this growing cohort of budding job creators and job fillers gain their skills in Computer Vision programming? If they get to play the 'Seeing Eye Child' Robot Adoption Agency game during their formative years, a growing number of them could develop strong CV and AI programming skills and interests by writing FactMiners 'Robot players' to be effectively 'put up' for adoption in the game's Adoption Agency. Role-wise, these 'robot' player/programs are the 'real' player's agent-actor programs. To borrow the anthropomorphic imagery of Disney's 1982 scifi classic, TRON, our young programming "Flynn" user/players will be sending their "Clu" agent/programs into the Robot Adoption Agency to begin a cyber-learning journey into the British Library Digital Image Collection.

From an 'ends-testing' perspective our concern for the game's Adoption Agency robot supply can more creatively be seen, not as a robot (i.e. agent-program) supply problem, but rather as a robot-programmer supply opportunity. Our game's desirable side-effect is to act as part of its own positive feedback loop whereby the demand for more and better CV/AI programs in the emerging Internet of Things will generate demand for more and better robot programmers.

Having both means- and ends-tested the motivation and justification for this game design idea, a fundamental question remains... Is machine-learning image recognition like what is assumed to be available in the proposed Robot Adoption Agency game even possible? And if possible, is there a place for human-mediated vision training (the 'Seeing Eye Child' player's role) as envisioned in the game? To consider these important questions, let's take a quick trip to the legendary Stanford AI Lab.