Timlynn and I have two projects in the Pacesetters/semi-final round of the Ashoka/LEGO #Play2Learn 'Re-imagine Learning' Challenge. These two projects are intimately inter-related as "means and ends" in the domain of LAM-based (Libraries, Archives, and Museums) social games that keep us engaged in preserving and exploring on-line digital collections of our cultural heritage.

The "means" aspect of our two projects is our FactMiners.org entry. Our "ends" entry is The Softalk Apple Project which is creating the definitive on-line archive of Softalk magazine which chronicled the early history of the Microcomputer Revolution. The Softalk Apple Project will be the first on-line cultural heritage collection to be "fact mined" by the FactMiners game community.

So where the heck does www.DIYPlanetWalk.com fit in? And why "bundled crowdfunding"?

The Pivot and the MVP

Lean startup - what is pivot from Yuki Sekiguchi

You cannot read much mainstream tech or business press these days and not escape talk of "pivots" and "MVPs" (minimally-viable products).

Pivoting can be a "polite" way to say, "All that money we raised and blew through thinking we were an X company... that was just a warm up and lessons learned for our pivot to the business we were meant to be all along..." Often this is done because venture investors don't want to write off their investment and, as a way to salvage that relationship, provide some extra resources (and "incentives") along with some additional time to see if the struggling business can pay off in some other way. This is an admittedly somewhat cynical assessment, but too often not far from the truth.

The Minimally Viable Product (MVP) summarizes the trend toward creating a new software product that has "just enough" features to be credible as the thing it promises to be, get it out there, and then quickly and interactively evolve the product through continuous development, frequent updating, and as much as possible engagement with users interactively to make sure that the product meets the ACTUAL needs of the customer rather than ASSUMED needs.

Nothing cynical to say about this popular idea among today's developers. What used to be long, hard, and slow is now short cycles, easier development through good tools, frameworks, and standards, and everything fast, fast, fast.

So it almost goes without saying that we are increasingly in an "You Are on Your Own Kid" World. Nimble startups -- especially dejobbed ones of elastic networks of entrepreneurial "free agents" -- with new tools like crowdfunding and born-digital/all-digital distribution have access to app-hungry social-consumption communities (AKA App Stores). In this 21st Century business environment, pivoting in combination with MVP "applied R&D" will likely prove to be the best core strategy "theme" for sustainable software business in an every-changing world. For a quick "Master Class in 10 (quick slides)" on these ideas, take a run through these two slide shares by Silicon Valley startup consultant/entrepreneur Yuki Sekiguchi of StartupNavigators.com.

Why the Pivot? And What MVP?

Well, technically we're not doing a "full pivot" but rather "pivoting" in the sense of reordering some of the steps and priorities in the evolution of FactMiners' research and development strategy. That is, we're making a dramatic mid-course correction in response to our first round Ashoka/LEGO #Play2Learn Challenge peer feedback. Here's what we are doing and why... 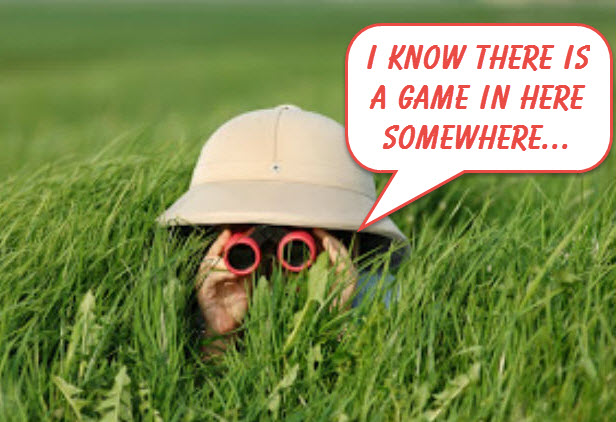 The Deep Weeds stuff we are used to and expect when non-technical folks take a peek into what we are doing to design and develop the FactMiners social game platform. We are, after all, excited to be working with informal mentor/collaborators at The British Museum and other prestigious institutions who are interested in helping us evolve our innovative solution design for "fact mining" text and image data details embedded in the digital content of on-line cultural heritage collections of LAMs (Libraries, Archives, and Museums).

There is no easy way to talk about doing a domain-specific extension of the International Council of Museums' Conceptual Reference Model (ICOM CRM), via METS/ALTO metadata extension standards, to support artifact segmentation and content semantic modeling. For example, just think about the different kinds of content that can make up a typical magazine page, unlike a book which is essentially one thread of content from beginning to end. To fully model the 48-issue magazine archive and mine its 9,300+ pages of detailed content describing the microcomputer revolution's "Who, what, where, when and how?" is a complex, challenging, and excitingly interesting problem. So we kind of accepted the "Too Deep Weeds!" feedback.

It was fairly easy to accept and dismiss the "Where are the games?" concern as well. Again, our thinking ran along the lines of "We're working in the Deep Weeds of a bleeding edge of the museum informatics domain, and we have to do this foundation work before we can begin designing and developing specific games that will use this platform. So, please, just hold on a bit. We'll get to the games after we've designed and developed the web service and game client framework on which these games will be built."

These rationalizations made sense to us... But did we have to accept them? Was there a way to "pivot" so we could get to developing some games while doing it in a creative way as part of the #Play2Learn Challenge? And if we wanted to get something going quickly during the Pacesetter round of the Challenge, what would our MVP (minimally viable product) be? And if we are going to "do a pivot" what is our business hypothesis worth testing? Just shifting the order of activity around, in other words, is not enough to be an MVP-testable pivot.

These concerns boiled down to the question of whether we needed to fully design and develop the more elaborate modeling aspects of the proposed FactMiners social game platform BEFORE we did our first game. And if we could do such an activity/focus shuffle, what would be a good choice for that MVP?

At the same time that we wrestled with these questions, we were doing some soul-searching about whether we would be successful doing a Kickstarter.com or similar campaign on one of the crowdfunding services? We felt good about our work and the small-but-important group of museum informatics folks interested in our projects. But our enthusiasm and the interest of a relatively small group of museum tech folk would not be enough to ensure our success if we went to Kickstarter for our first funding.

Our ideas for bundled crowdfunding evolved in response to seeing the struggles that some of our fellow #Play2Learn entrants had in doing their individual crowdfunding campaigns. We also volunteered a tremendous effort to help a small museum education group successfully fund a professional development resource for museum docents (those helpful folks who guide you through a museum or who stand about to answer questions).

Perhaps, our thinking went, we could do three things to shift the balance in our favor in pursuit of Kickstarter success:

With these insights pushing us toward the idea of "bundled crowdfunding" as a way to improve our chances of success on Kickstarter, the open question was, "What game could FactMiners create that would fit this bundled crowdfunding strategy?" Answering this question is where the "elastic networking" aspect of our MVP Identification creative thinking came into play. 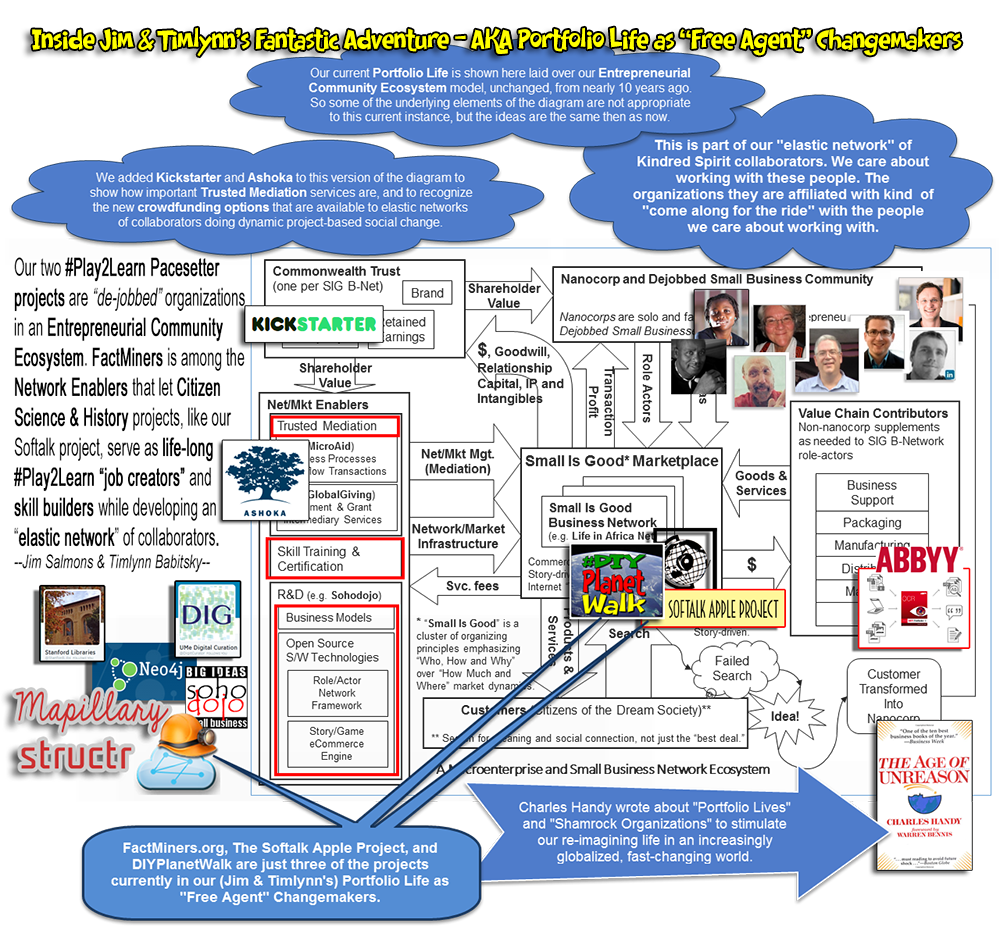 We've described the underlying model of our #Play2Learn projects as being part of an "entrepreneurial community ecosystem." One of the features of this model is the assumption that a collaborative "entrepreneurial free agent" has an "elastic" network -- that is, an informal and dynamic collection -- of Kindred Spirits who are trusted and with whom the entrepreneur likes to work.

One of the members of our elastic network is Peter Neubauer of Malmo, Sweden. Peter is a co-founder of both Neo Technology (the Open Source company that created and supports the Neo4j graph database) and Mapillary (the hot and explosively growing leader in "Street View" style Open Data contributions to the OpenStreetMap repository). Peter is a great guy that truly understands the power of collaboration. Although we did not know exactly what we might do together within the #Play2Learn Challenge, we had invited and Peter accepted our invitation to be on the FactMiners #Play2Learn project team.

When we first learned about Mapillary, we saw the potential to develop Mapillary social games combining geospatial data with digital humanities -- "History Pictures" for example. Thinking ahead, we registered a number of domain names for various game ideas we had in mind, and chatted this up with Peter. Essentially, we told Peter, we wanted to be Mapillary's "go to" partner for Mapillary-based games. Peter liked the idea and encouraged us to go for it.

About this time when we were working through our ideas about "bundled crowdfunding," another of our FactMiners' #Play2Learn Team members, Axel Morgner of Frankfurt, Germany, was scheduled to teach a seminar in Zurich about Structr. Structr is the Open Source web application platform which Axel and his brother, Christian, created and which FactMiners has adopted as an important layer within our Open Source stack for the FactMiners game platform.

With all this information swirling about, I was reminded of my time nearly twenty years ago as a Corporate Road Warrior when I walked the Planet Trail along the mountain ridge in Zurich, Switzerland. I was so impressed with the Zurich Planet Walk that it amazed me that there were not similar walks in many places around the world.

That's when my latest "A-ha!" Moment hit me... The Open Source social game app that we would develop as our first Mapillary-based FactMiners game would be #DIYPlanetWalk, an app to make it easy to create your own solo or social Planet Walks! :D And we would develop it as part of a grand collaboation to do a self-help experiment in "bundled crowdfunding" as part of the Pacesetters Round of the #Play2Learn 'Re-imagine Learning" Challenge. 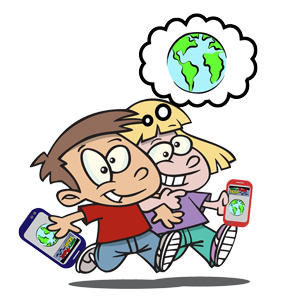 With the model -- bundled crowdfunding -- in mind and the game app to be developed identified -- DIYPlanetWalk -- we had evolved our response to our first round #Play2Learn feedback... We were certainly out of the Deep Weeds and we had a plan by which to fast-track our first FactMiners game development.

And that is where we are at this time, we envisioned #DIYPlanetWalk as an entreprenurial community ecosystem which can serve as a virtual "plaground" for Pacesetters to practice our collaboration skills while finding ourselves much-needed initial funding. That's the "business model hypothesis" we will be "testing" in our self-help experiment as part of the #Play2Learn Challenge.

Will this fun plan work? We think so, but there is only one good way to find out... and that is to give it our best effort to find and collaborate with Kindred Spirits in the #Play2Learn Challenge.

We're planning an "organizing committee" meeting via Google Hangout (or Skype, etc.) sometime soon to answer questions and talk about our "warm up" exercise. If you are a #Play2Learn Pacesetter, we are especially interested in talking with you. We hope you will join us, Floyd Mayfield of the Chichetekelo School project, and Lily Kudzro of the Devio Arts Centre project, for a chat about how we can have some fun working together while helping ourselves and each other to raise some much-needed project funding. We'll announce the upcoming meeting and work out the particulars on the Re-imagine Learning Facebook group.